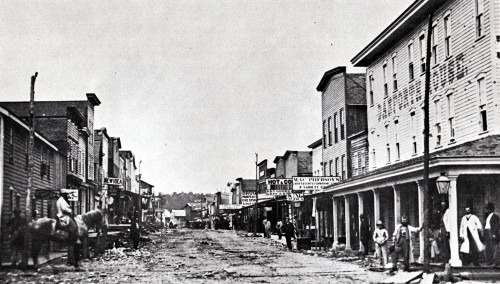 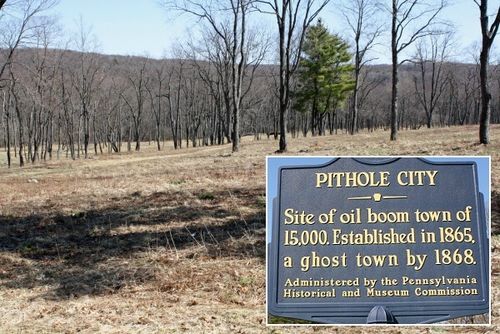 As someone born and raised in Northwestern Pennsylvania I was always fed the legend in school that in 1859 Col. Edwin Drake drilled the first artificial oil well.  While I know now that is not true, there are many who drilled wells in the 19th century, not to mention the Chinese who drilled for oil as far back as ancient times, it was Drake’s accomplishment that would create the birth of the modern oil industry.  As a result of Drake’s discovery, hundreds of thousands of prospectors from around the world flocked to Northwestern Pennsylvania seeking opportunity and riches.  Most settled in the area of Venango and Crawford County, founding towns that exist today such as Oil City, Franklin, and Titusville.

The cities and towns that were created as a result of the Pennsylvania Oil Rush were much like the gold and silver boom towns of the old west.  Populations exploded rapidly, but when the riches ran out, all that was left was a series of empty ghost towns.  One of the most famous of the PA oil region was Pithole.  Located in between Vengango and Forest Counties, Pithole was a boomtown that was often compared to Dodge City in the West.  In January of 1864 Pithole was founded when an oil prospector named Isiah Frazier struck black gold.  By July 2,000 people settled in Pithole, by Novemeber that number had exploded to 15,000 people.  By Christmas day of 1864, Pithole was home to around 25,000 immigrants.

A bustling boomtown, Pithole sported 54 hotels, 3 churches, a number of stores, and numerous saloons, gambling dens, and brothels.  In addition, the landscape would have been littered with scores, if not hundreds of oil wells.  Most residents of Pithole were oil prospectors who were there on a temporary basis, moving in to drill a claim, and going home when they either busted out or struck a fortune.  Along with oilers were a number of other people such as merchants, lawyers, land speculators, doctors, craftsmen, and skilled people necessary for a healthy town.  The boom also brought a number of less desirable people such as gamblers, prostitutes, outlaws, gangsters, thieves, and con artists.

The fall of Pithole began when in early 1866, a mere two years after its founding, oil wells in the town hit peak production.  By spring of the same year financiers began to flee pithole in search for greener pastures.  When the financiers left, so did the oilers, and when the oilers left, so did everyone else.   By December of 1866, the population of Pithole dropped to only 2,000.  By 1870 only 237 lived in Pithole, and by 1880, it was an abandoned ghost town.  Unlike western ghost towns, where the town is preserved by dry conditions, Pithole was quickly overrun by forest and foliage.  Today all that remains of Pithole are the foundations of streets and buildings, protected by the state as a part of Oil Creek State Park.  Pithole was not unique among PA Oil Rush boomtowns, as dozens of other boomtowns suffered similar fates and were quickly wiped off the map.  In 1891 Pennsylvania oil production peaked at 31 million barrels.  Soon afterword, other oil regions such as Ohio, California, Wyoming, Oklahoma, Texas, the Gulf Coast, and Alaska would draw oil booms of their own. By 1901, the PA Oil Rush had moved on, leaving dozens of empty boom towns like Pithole with it. 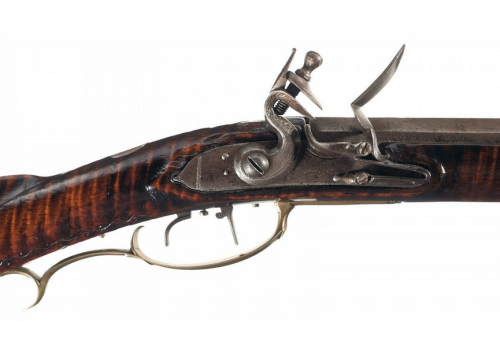 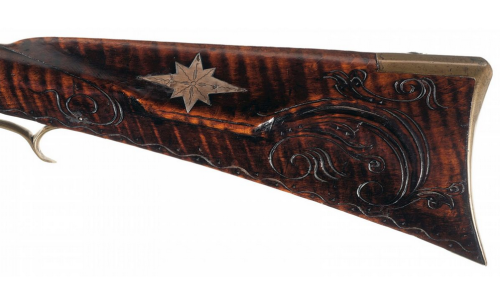 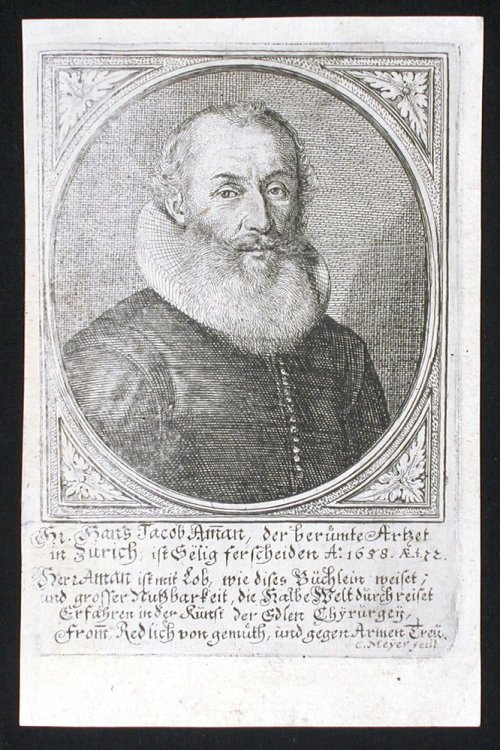 The Followers of Jakob Ammann,

In the early 1700’s a group of Anabaptist’s from Switzerland and the Palatinate region of Germany began to emigrate to America due to religious wars and persecution. Most settled in Southeastern Pennsylvania, invited by William Penn as part of his policy of religious tolerance and diversity.  Once in America they founded large and prosperous communities in Berks and Lancaster Country, then spread all over the United States.

They called themselves “The Swiss Brethren”.  However because they were the followers of the Swiss Anabaptist Jakob Amman they soon became known as the Amish. 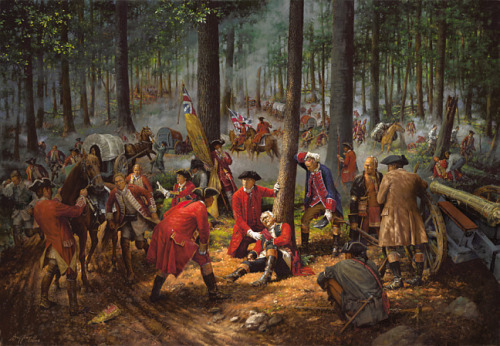 The Death of General Braddock, Battle of Monongahela, French and Indian War 1755.

The soldier in the blue uniform is a young George Washington. 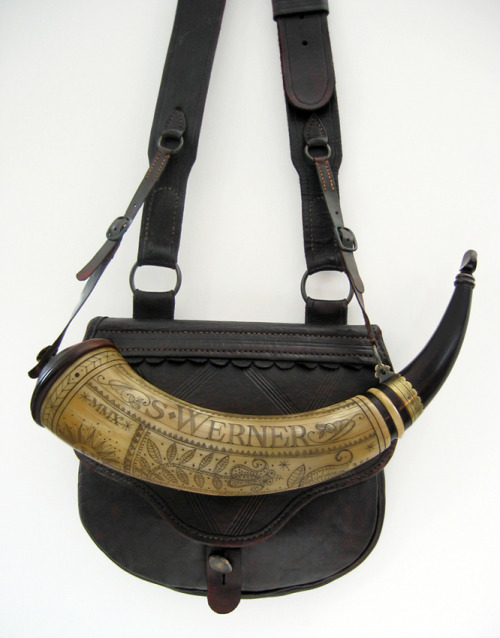 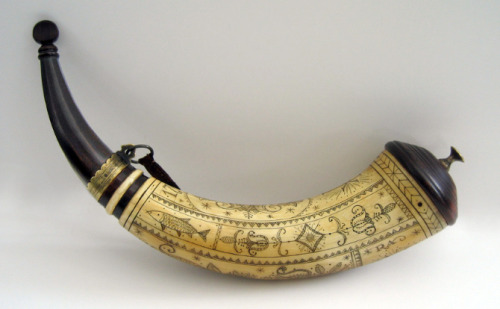 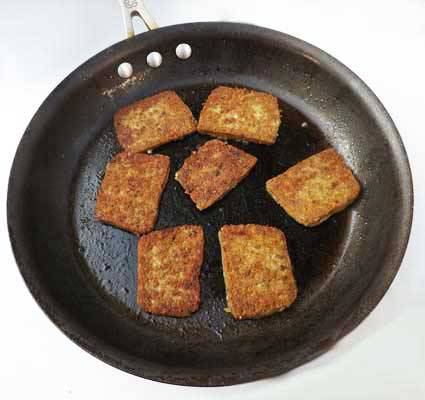 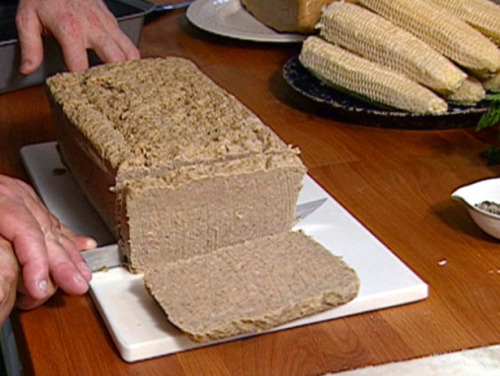 A Salute to Scrapple,

As a native Pennsylvanian who lives in the midst of a large Pennsylvania German community (though I am of Italian descent), how can I not at some point give a shout out to the ancient dish commonly known as breakfast meatloaf?
Americans today can be very fickle and picky eaters, and various ethnic dishes are often sadly turned away because of the common “ick factor”.  I can guarantee you 100% that your ancestors did not share such habits.  Back in the day it was very common for families to practice “offal eating”, which means that when an animal is slaughtered, every bit of the animal is consumed from tail to snout.  “Waste not, want not” was more than just a motto, it was an everyday way of life.  Scrapple (aka pon haus) is a result of this tradition.

Brought to the United States by the Pennsylvania Dutch, a group of German immigrants who settled Pennsylvania during the colonial era, scrapple is kind of like a meatloaf made from the various trimmings and organs left over from slaughtering a pig.  Usually the bones and organs are boiled in a large pot until the scraps of meat fall off the bone.  Then the pieces of meat are further minced, mixed with cornmeal, buckwheat, and spices then molded into a loaf.  The loaf is sliced and pan-fried, traditionally served as a breakfast food.

Today scrapple is not a common food for the average American diet, but is still popular among ethnic groups in the Eastern United States.  It can be found in some grocery stores and is often common in small mom and pop stores (a small store near wear I live sells it).  Furthermore some eastern cities and towns, (Philadelphia for example) have annual scrapple festivals.  If ever you have a chance to sample some scrapple, try it before you say “ick”.

Note: Scrapple is ridiculously high in fat and cholesterol, so I wouldn’t eat it too often. 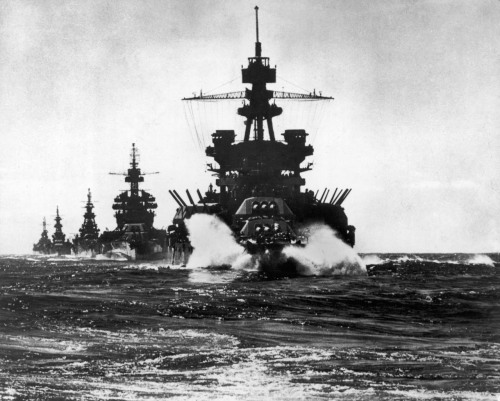 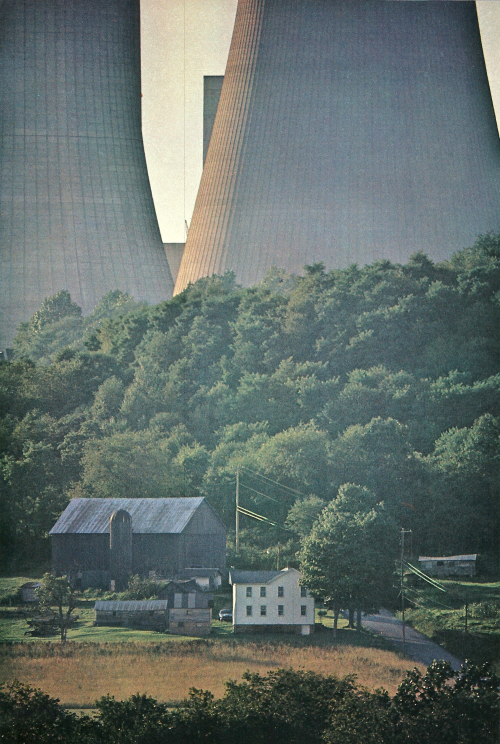 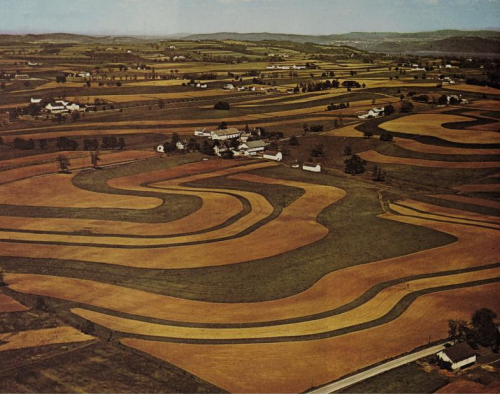 Stopped at the ponds. It’s so green now. 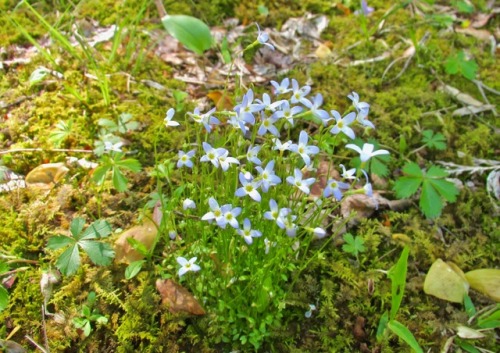 “Two hundred years from now the numbers and kinds of species we observed here in the latter years of the 20th century [and early 21st century] may seem as unbelievable to future generations as the presence of passenger pigeons, cougars, wolves, and bison in Pennsylvania two hundred years ago seem to us.” 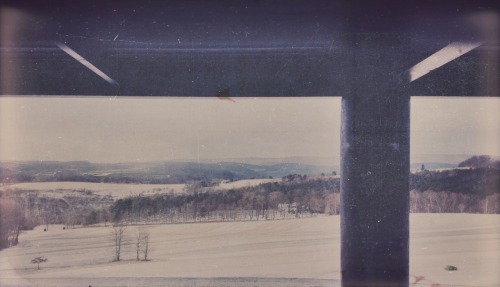 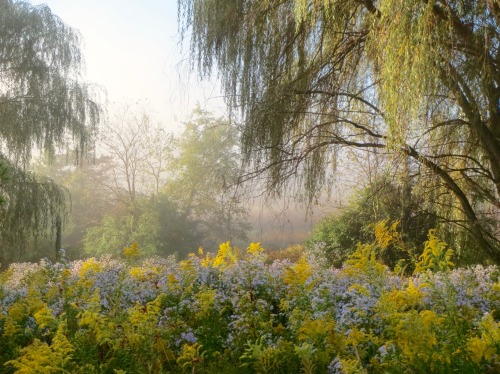 Irrational exuberance under the willows. 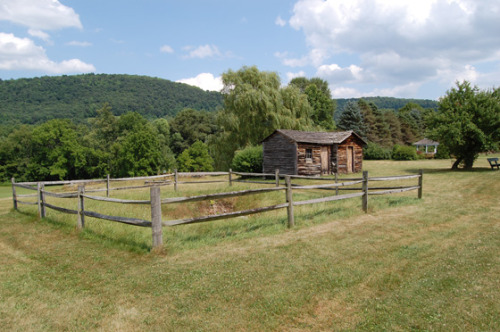 In 1793, the French Revolution was in full swing. Royal sympathizers—nobles, military officers, clergy, and other aristocrats—were guaranteed a sharp kiss from the guillotine. Frightened, thousands of aristocrats fled to neighboring countries like Austria and Prussia. A small handful of nobles, however, escaped to a place so obscure that they were able to start their own refugee colony, the only one of its kind. Their location? A meadowed hamlet in the Pennsylvanian backwoods.

There, a 4000-mile buffer separated the expatriates from the bloody streets of Paris. The nearest American city, Philadelphia, was 150 miles southeast. Miles of rolling hills and wavy pastures locked each person away from civilization. It was a sanctuary all right, but how did the King’s close circle wind up in the middle of nowhere?

You’ve Got a Friend in Pennsylvania

It all started when Robespierre condemned Colonel Vicomte de Louis de Noailles to death. Noailles was a prominent military man with an impressive network: the Marquis de Lafayette was his brother-in-law, his mother was Marie Antoinette’s Chief Maid of Honor, and George Washington was one of his war-buddies. Sadly, Noailles’ royal ties destined him for the chopping block. By 1793, his entire family had been executed, forcing him to flee to Philadelphia.

In Philly, Noailles met Omer de Talon. Talon had been an advisor to King Louis XVI and served as Chief Justice of France’s Criminal Court, a job that made him pretty unpopular with Jacobin rebels. After a few prison terms, Talon escaped France by hiding in a wooden cask stowed at the bottom of an American ship.
When the two met in Philadelphia, they immediately began bouncing around the idea of starting a haven for other exiles. They met with a trio of shrewd American businessmen, who accepted the well-to-do refugees with open arms (partly because they knew they could make an easy penny). When the trio heard their idea, they bit at the chance to make it happen. The three men floated up the Susquehanna and found an isolated, but fertile, patch of land. Noailles and Talon loved it, and they naively bought it at an absurdly over-inflated price. After sketching the plans for France’s newest court, they started building.

French aristocrats were a dainty bunch. Few knew how to use a shovel or a plow, making them awful candidates for manual labor. So, rather than soil their hands, they hired locals. The local were no dummies. They took advantage of the language barrier, and overcharged the noblemen for each house they built. After three months of construction, 30 log cabins stood on the pasture, and Royalists began filling the homes. The colony was named “Azilum,” meaning “place of refuge.”

Although Azilum was nothing like the estates in France, the pampered aristocrats didn’t exactly rough it. Parisian fashion had plowed its way to the prairie—cabins were lined with fleur-de-lis wallpaper and rococo furniture. Women wore silk gowns and sparkly jewels, a stark contrast to the gritty, dirt-covered farmers who lived nearby.

Architecturally, the crème-de-la-crème of the colony was an opulent 3,600 square foot mansion dubbed “Le Grande Maison.” Some historians believe the massive house was Pennsylvania’s Versailles—it’s speculated that the house was built for Queen Marie Antoinette and her children. Indeed, there were plans to get the Queen out of France, but no one knows if her getaway plans included Azilum, or if Le Grande Maison was built just for her. Regardless, she lost her head before any plans were realized.

For 10 years, some 200 French exiles lived at Azilum. Many were confidants of the King: courtiers, army officers, special clergy, and other nobility. At one point, Louis Phillipe—who later became King of France—visited the settlement. But at the turn of the century, things started going downhill. The original backers went bankrupt, and the refugees stopped receiving money from Royalists overseas. Azilum’s economy floundered, and its citizens began filtering out. Some headed to bigger cities like Savannah, Charleston and New Orleans. Others went back to France after Napoleon granted repatriation rights to émigrés. Azilum quickly deteriorated into a royal ghost town, a scenic but obscure pasture.

Interested in the full story? You can visit Azilum, where vestiges of the old settlement, as well as later settlements, still remain.

Read the full text here: http://www.mentalfloss.com/blogs/archives/133520#ixzz20Reut7mH
–brought to you by mental_floss! 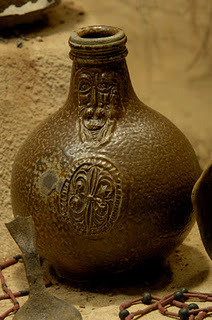 This Week In Pennsylvania Archaeology: Archaeological Evidence of Witchcraft in PA?