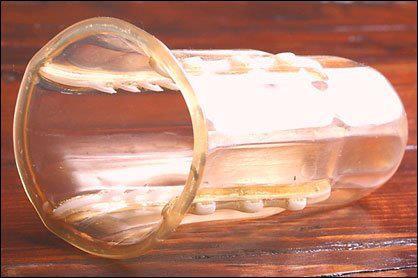 Rape has become endemic in South Africa, so a medical technician named Sonette Ehlers developed a product that immediately gathered national attention there. Ehlers had never forgotten a rape victim telling her forlornly, “If only I had teeth down there.”

Some time afterward, a man came into the hospital where Ehlers works in excruciating pain because his penis was stuck in his pants zipper.

Ehlers merged those images and came up with a product she called Rapex. It resembles a tube, with barbs inside. The woman inserts it like a tampon, with an applicator, and any man who tries to rape the woman impales himself on the barbs and must go to an emergency room to have the Rapex removed.

When critics complained that it was a medieval punishment, Ehlers replied tersely, “A medieval device for a medieval deed.”

- Half the Sky, Nicholas Kristof

I BOW TO THIS INTENTION

Can we talk about how beautifully this turns rape culture on its head? Instead of “If they weren’t dressed like that they wouldn’t have been raped” THIS IS LITERALLY “IF THEY HADN’T TRIED TO RAPE SOMEONE THEY  WOULDN’T HAVE SPIKES IN THEIR DICK”*

reblogging for the rape culture comment omFG AMEN TO YOU

Source Link  via  Welcome to the mess