[email protected]linguisticparadox
30s, she/her, bi as hell and gray-aroace. Battleaxe bi as in I am bi and I will defend pansexuals with my battleaxe. Please don't follow if you post a lot of untagged n/s/f/w to your main. Book blog: wellreadredhead TAZ blog: bartholomew-bluejeans SU blog: pearlprizepouch Dog Man blog: petey-the-cat Coco blog: your-best-grito Watch out for hyperfixations both new and old to crop up!
Post Total: 25 Latest posts I usually do lentil soup, myself

Basically any time I decide to say “hey nonbinary people get treated like shit and people in my position specifically get left out in the cold a lot” I lose a number of followers. I’m pretty sure I’ve had people block me over literally just saying that. I hate that nonbinary issues often relegated to the status of “discourse” instead of, like, actual threats that we experience and the only people I can talk to about it are other nonbinary people.

I’ve lost count of the number of death threats I’ve gotten just for, like, existing, so I’d really like it if folks stopped acting like being nonbinary is ezmode

Just thinking. Wonder if the reason why not a lot of people seem to care when AMAB NB people are treated as though they’re just men is because a lot of people just silently see AMAB nb people as men

Like tbh its something that keeps me pretty secretive about it irl. I feel like I’m going to be treated with less suspicion if I just let people assume I’m a man and only bother correcting them when we get closer. All of this stuff has made it incredibly difficult to even get to this point in understanding my own identity. People are so fucking shitty about it. The fact that “abusive man who pretends to be nonbinary to hit on girls” is a thing I’ve seen people believe and crack jokes about within trans spaces really illustrates the problem.

“People can’t anticipate how much they’ll miss the natural world until they are deprived of it. I have read about submarine crewmen who haunt the sonar room, listening to whale songs and colonies of snapping shrimp. Submarine captains dispense “periscope liberty” - a chance to gaze at clouds and birds and coastlines - and remind themselves that the natural world still exists. I once met a man who told me that after landing in Christchurch, New Zealand, after a winter at the South Pole research station, he and his companions spent a couple of days just wandering around staring in awe at flowers and trees. At one point, one of them spotted a woman pushing a stroller. “A baby!” he shouted, and they all rushed across the street to see. The woman turned the stroller and ran. Nothing tops space as a barren, unnatural environment. Astronauts who had no prior interest in gardening spend hours tending experimental greenhouses. “They are our love,” said cosmonaut Vladislav Volkov of the tiny flax plants - with which they shared the confines of Salyut 1, the first Soviet space station. At least in orbit, you can look out the window and see the natural world below. On a Mars mission, once astronauts lose sight of Earth, they’ll be nothing to see outside the window. “You’ll be bathed in permanent sunlight, so you won’t eve see any stars,” astronaut Andy Thomas explained to me. “All you’ll see is black.””

— Mary Roach. Packing for Mars: The Curious Science of Life in the Void.  (via hummeline)

the mortifying ordeal of hearing a recording of your own voice

I reblogged this last month, tagged it, and said “might as well see if it works.” I used this video as a reference to find all the forms that i needed (which is A LOT, especially if you’re a dependent) and sent them through the mail, not really allowing myself to hope.

$2,714 of medical debt from my top surgery - gone. im shaking this was such a weight on me for 2 years and it fucking worked. what the fuck. 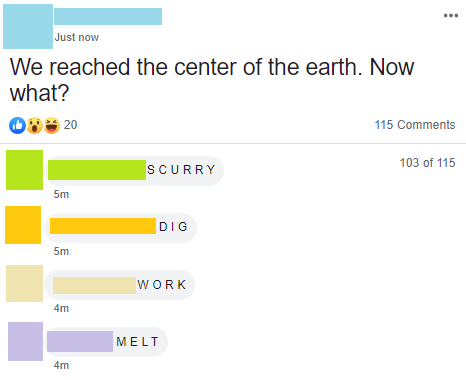 Guys I found the only good thing on Facebook.

[Image 1: A Screenshot of an invitation to a Facebook group named: “A group where we all pretend to be ants in an ant colony.” Under that is a post in the group that reads: “We reached the center of the Earth. Now what?” Four people commented saying one word each in this order: scurry, dig, work, melt. These words are in capital letters and have spaces between each letter.]

[Image 2: Another Screenshot of a post in the group that reads: “It has come to my attention that when we put the spaces in-between letters it makes it difficult for visually impaired ants to know what we’re saying and so I was wondering if we could try to make this group more accessible for them. (The text to voice can’t figure out what we are saying with the spaces) (Picture of an ant for attention)” This text is then followed by a close up picture of an ant.]

[Image 3: A screenshot of some comments on the post in Image 2. Five people commented: adapt, adapt, inclusion, love adapt, adapt. These words are in capital letters and have no spaces between the letters.]

Please do not reblog this post without image descriptions! The irony of sharing undescribed images that talk about inclusivity for the visually impaired is… Painful.

this guy talks insanely fast but this is solid info on electrical outrages in the US.

here’s a transcription of what this guy says in this video, because he talks extremely fast — i’m also including sources wherever possible, in case anybody wants to do some further reading or wants proof

If you’re looking at Texas right now and thinking, “It seems pretty bad that a state’s electrical grid can fail overnight from a snowstorm,” I have news for you. It’s so much worse than you could ever imagine. Don’t be a heartless idiot and blame ‘red state voters;’ it’s red states, blue states, purple states, green states, everywhere is in crisis.

In 2017, the American Society of Civil Engineers gave our energy grid a D+, because almost all of it was built in the 1950s and 60s with a 50-year life expectancy, and we’re 10 to 20 years past that. Across the country, 640,000 miles of high voltage lines run at full capacity at almost all times, which is way more than the grid was designed to handle, and Texas in particular has one of the worst ratios between planned and real capacity.

Today,the US has more power outages than any other developed country. And that’s because 68% of the electricity in the US is managed by investor-owned privatized utility companies [the source I found said it’s actually 72%], and updating their systems cuts into their profits, so they don’t do anything until something fails. And when things do fail, and, for example, start massive wildfires in California, guess who pays for it? Mostly taxpayers.

There’s no good news, and that’s just the tip of the iceberg, because all of America’s infrastructure is failing, so I’m gonna keep doing videos about it.

thank you !! I was hoping someone would do a transcript

its funny when edgy dudes are like “humans are unnatural. we are the only species that will consume so many resources that the land can not sustain us and still continue to reproduce. name one other species that does that” because like, off the top of my head? deer.

Another series of dreams and things. The text of the last one taken from @normal-horoscopes

New gender: comfort the afflicted and afflict the comfortable

Not realistic he got a reply after submitting his résumé

i will never be over how hard mrs potts went

I just saw the coolest thing! There’s a company called Deaf Metal that makes jewelry specifically designed to accessorize hearing aids and cochlear implants! They’re made of hypoallergenic silver and use a cool little silicone sling to attach the jewelry to your existing device.

They create designs for people of all ages, gender presentations, and personal styles. For the hearing aid designs, they have designs that go behind the year as well as ones that slide onto the pipe going into the ear. They’re designed to be fashionable but not decrease function!

They advertise them as a way to both help you accessorize and to help you keep your hearing aids as findable as possible in the event that you misplace one, or in the case that your hearing aid slips off. Their safety chain options are available in both adults and children’s designs.

They’re designed by a Finnish HOH designer named Jenni Ahtiainen who has previously done accessory work for people like Snoop Dog & Bono. She believes that hearing aids & cochlear implants should be like glasses, you should be able to style them to your liking. All the products range in cost from $15-50 and if you only wear a hearing aid in one ear, many designs offer the option of purchasing an earring for your other ear so you can match! You can see her other design work at @gtiejenni and @gtieneckwear.

Deaf Metal sells & ships worldwide (USA, Canada, Australia, Great Britain, Norway, Finland, and France, to name a few) from their online store and their amazon shop. They also have some brick and mortar retailers that carry their designs in Norway and Finland.

You can find their website in this post’s sources.

www.deafmetal.store (bc the source doesn’t always show in reblogs)

A two-meter-long painting of a kangaroo in Western Australia’s Kimberley region has been identified as Australia’s oldest intact rock painting.

Using the radiocarbon dating of 27 mud wasp nests, collected from over and under 16 similar paintings, a University of Melbourne collaboration has put the painting at 17,500 and 17,100 years old.

“This is a significant find as through these initial estimates, we can understand something of the world these ancient artists lived in. We can never know what was in the mind of the artist when he/she painted this piece of work more than 600 generations ago, but we do know that the Naturalistic period extended back into the Last Ice Age, so the environment was cooler and dryer than today.” Read more.