[email protected]elkian
formerly forbidden cow magic, an unpleasant experience awaits you, kiss kiss fall in skulls, how do you do the d
Post Total: 25 Latest posts

look. fungus can be pretty bad in your house, both structurally and in terms of the inherent health effects of having a living organism have sex on your walls and then release the resulting millions of spores into a confined space. but like. if you have three admirably large shelf-like mushrooms sprouting from the base of the wall in your living room, and they create a spore print so large it billows out a good couple feet….. idk man that might just be theirs now

i dont blame the person living here because these guys can come up pretty quickly and it’s possible they just didnt see it, especially because the area around it seems otherwise free of clues suggesting their mighty presence, but like….at what point do you just accept their annexation….how big does a newly-emerged mushroom have to be to claim squatters’ rights on a stretch of drywall

Saw some folks doing the classic “haha hope everyone in the south dies from the ice” type jokes! If you are doing that, fuck you!

Austin Mutual Aid (link is to their “Kick The Cold” efforts)

Southern Solidary (New Orleans based; trying to get resources for unhoused people during the freeze)

Please add more if you can!!! There are many more I haven’t listened and am not familiar with!!!

Context: A Portland Fred Meyer lost power for many hours due to bad weather and decided they had to throw out a shit ton of perishable but package sealed food. An employee tipped off local activists who showed up to retrieve and distribute this perfectly good food to people in need. Then cops showed up an guarded a literal dumpster with guns because that food Fred Meyer decided was garbage was their “property.”

ACAB and fuck Fred Meyer too for calling the cops and for trying to fire the employee who tipped off activists.

If most cops were good, they’d be offended by someone even suggesting that they do this.

they have got to let the huge sideburns on men in period dramas go. i do not care about historical accuracy. and even if i did white women on youtube told me none of the womens fashion is ever historically accurate anyway so WHY do i still have to be subjected to those abominations. ~oooh we gotta sew in wires in the seams of the women’s clothes to create sexy titty sillouettes or whatever the fuck but we draw the LINE at shaving the rats off this mans face -_-

I love this, because there’s obviously something very clever going on to analyse patterns of language, but it’s also profoundly ignorant.

[ID: A screenshot of a Grammarly correction, labelled “clarity: conciseness”. The original text reads “Every book, which wasn’t many…” This is crossed out with the suggestion “Everyn’t many book” and the note “Consider shortening this phrase.” /end id]

I’m…not the only one?

The palm of your hand has thick skin which is firmly anchored to the underlying tissue, so it’s hard to get a good scratch there with your fingers.

I’m tired of hearing people say “Disney’s Cinderellais sanitized. In the original tale, the stepsisters cut off parts of their feet to make the slipper fit and get their eyes pecked out by birds in the end.”

I understand this mistake. I’m sure a lot of people buy copies of the complete Grimm’s Fairy Tales, see their tale of Aschenputtel translated as “Cinderella”, and assume what they’re reading is the “original” version of the tale. Or else they see Into the Woods and make the same assumption, because Sondheim and Lapine chose to base their Cinderella plot line on the Grimms’ Aschenputtelinstead of on the more familiar version. It’s an understandable mistake. But I’m still tired of seeing it.

The Brothers Grimm didn’t originate the story of Cinderella. Their version, where there is no fairy godmother, the heroine gets her elegant clothes from a tree on her mother’s grave, and where yes, the stepsisters do cut off parts of their feet and get their eyes pecked out in the end, is not the “original.” Nor did Disney create the familiar version with the fairy godmother, the pumpkin coach, and the lack of any foot-cutting or eye-pecking.

If you really want the “original” version of the story, you’d have to go back to the 1st century Greco-Egyptian legend of Rhodopis.That tale is just this: “A Greek courtesan is bathing one day, when an eagle snatches up her sandal and carries it to the Pharaoh of Egypt. The Pharaoh searches for the owner of the sandal, finds her and makes her his queen.”

Or, if you want the first version of the entire plot, with a stepdaughter reduced to servitude by her stepmother, a special event that she’s forbidden to attend, fine clothes and shoes given to her by magic so she can attend, and her royal future husband finding her shoe after she loses it while running away, then it’s the Chinese tale of Ye Xian you’re looking for. In that version, she gets her clothes from the bones of a fish that was her only friend until her stepmother caught it and ate it.

But if you want the Cinderella story that Disney’s film was directly based on, then the version you want is the version by the French author Charles Perrault. His Cendrillonis the Cinderella story that became the best known in the Western world. His version features the fairy godmother, the pumpkin turned into a coach, mice into horses, etc, and no blood or grisly punishments for anyone. It was published in 1697. The Brothers Grimm’s Aschenputtel, with the tree on the grave, the foot-cutting, etc. was first published in 1812.

The Grimms’ grisly-edged version might feel older and more primitive while Perrault’s pretty version feels like a sanitized retelling, but such isn’t the case. They’re just two different countries’ variations on the tale, French and German, and Perrault’s is older. Nor is the Disney film sanitized. It’s based on Perrault. 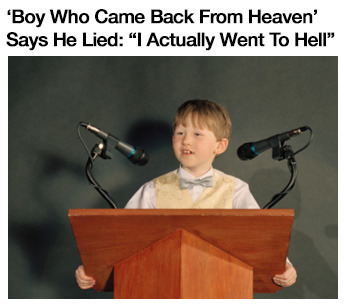 #this story is actually sad like#he said he didn’t go anywhere when he died#but his dad wrote the book and put the kid’s name on it cause the dad knew it’d sell a shit ton of books#”no shhh you went to heaven shhhh”#despite both the boy and his mother saying they DID NOT want the book published#it was published#and the boy saw NONE of the profit#it went straight to the dad#so the parents got divorced and he lives with his mom now#and despite asking and demanding and explaining multiple times that they didn’t want this book out there#and please take it off the market#it never stopped#so what did they do?#they did the only thing they thought would work#they said he went to hell instead so that the christians wouldn’t buy it so the monsters wouldn’t keep selling it#and it worked#it fucking#worked#they’re pulling the book from shelves#I know this post was meant to be funny but damn#knowing the whole story kinda#feels more important to me (tags: abananapepper)

Can I have a link to the article?

Here’s one I found.

Sidenote: I find it hilariously ironic that this family’s surname is Malarkey—for those who don’t know, it’s a colloquialism that means fake, B.S., etc.

i would die for this little boy

I dont really like making rebloggable posts but I haven’t seen anyone mention them yet: terracotta heaters are really easy and effective DYI heaters for cold emergencies and I think it might be helpful considering, you know

TDLR, place a candle of any size down, and put a terracotta pot (as large as possible preferably) over it, with something non-flammable and balanced to keep the bottom an inch or two off the ground, like bricks.

The candle will heat the terracotta, which will put off heat, while the space underneath lets smoke out and oxygen in. I’ve used these all 3 times we had outages here in Maine during blizzards to keep my aquariums warm, the weather outside had been easily -20 F with high winds, and not only was I cozy, that shit kept the water 10 degrees above room temperature. If it can heat the aquariums, it’ll heat a small room.

They work so much better than you’d think, the heat they put off is insane. Obviously be careful because smoke and open flame, but they’re very easy to make and just need an eye kept on them on all times.

Don’t touch the heated pot bare-handed, it’ll burn like a motherfucker, they get VERY hot. Use thick oven mitts or layered rags to remove pot, put the candle out first if you can manage. Don’t do more than one or two in a non-ventilated or closed room, it’s still making smoke and that can make it harder to breathe.

[ID: Two bricks are laid flat, two bricks are stacked on top on their sides. A candle is in a jar inbetween and is lit. A large terracotta pot is balanced on the second, higher set of bricks so it is above the candle and off the ground. End Id] 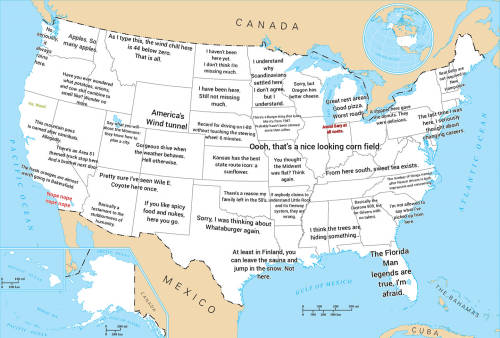 He’s right about the roads in Michigan.  I’m not gonna argue with him on that.

@gallusrostromegalus this seem about right for Colorado?

…Huh.  This is in fact, exactly correct.  This is the first time I’ve seen a map of the states where CO wasn’t “haha weed” or “Is this the midwest???”

That said, the roads are lovely and largely well-maintained but if the weather turns on you it goes from senic drive to I Shouldn’t Be Alive real quick.  Except for the mountain passes, which are always hell on earth no matter what the weather does.

Wellllllllllll the thing is I really WANT Gary Indiana to be all right, but it’s…it’s not.

Gary is super economically depressed because it has no industry and no real chance of one with Chicago so big and so cheap, so close. While I LOVE going to Gary for a ball game, and find some of its architecture extremely beautiful, the stadium is at one extreme end of the city and the area is STILL full of super bad urban decay. Unless you’re going to a ball game or want to buy a lot of meth, there’s not a lot of good reasons to go to Gary.

Mind you, the Railcats are a GREAT reason to go there and that area of the city’s pretty safe, so I encourage anyone who likes baseball to hit a game sometime when we can all sit in stadiums again.

I am bummed he has nothing to say about Chicago, though. We’re a major trucking hub! Surely he’s been there!

Me when I’m fixating on two fandoms at the same time: